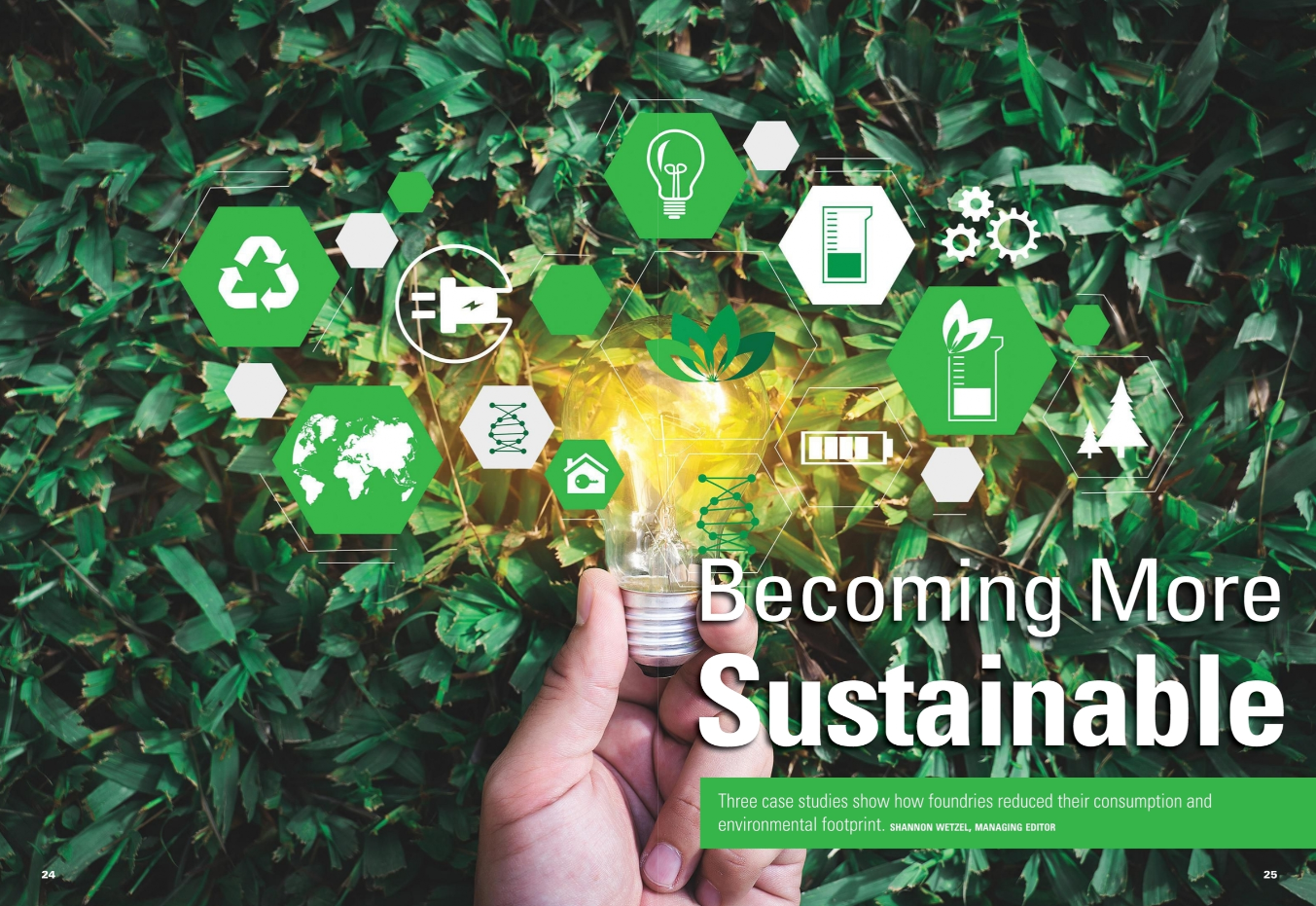 Metalcasting businesses gain many advantages through efforts to become more sustainable. They can save money, improve the environment for their employees and community, and show they can be part of their customers’ own sustainability goals.

Three foundries received this award in 2020 and their case studies are presented here.

Finding a New Use and Destination for Spent Foundry Sand

At AFS Corporate Member John Deere Foundry, spent sand was disposed as fill and buried in a local quarry for 20 years. In one year, the foundry could generate as much as 136,000 tons of waste sand. In 2014, when the foundry generated a peak amount of waste sand, the local quarry announced it was going to resume mining operations in the portion of the quarry devoted to foundry sand disposal. Initial projections showed they were only able to accept sand from John Deere for three more years at that site.

To continue normal operations, the foundry needed a new place to send its spent sand.

“I began by looking at other quarries and exploring beneficial reuse,” said Anthony Goettsch, senior environmental engineer at John Deere. When that didn’t lead to a doable solution, Goettsch had to get creative. “I decided to see if someone could use the sand in cement manufacture. I did some cold calling, and word got around that I was asking. A supplier in Mason City said they were interested in taking that material to supplant raw sand used during cement manufacture, and we started working through the project to make it happen.”

The agreement involved John Deere diverting its waste sand from the local quarry to the cement manufacturer. The cement manufacturer paid for the sand, but John Deere would need to cover the cost to ship the sand to Mason City, Iowa, 83 miles from the John Deere plant in Waterloo. The goal was to find a waste sand solution that was cost neutral to John Deere’s operations, so the cost of transportation, delivery of sand and value of the sand had to maintain a beneficial balance for both companies.

The first major obstacle John Deere encountered was infrastructure. The offload dock was not tall enough to accommodate shipping from a semitrailer. The existing waste sand dock was only designed for short steel trailers, and this hindered the foundry’s ability to get competitive transportation quotes. John Deere and shipping companies did not want to modify their equipment to accommodate due to the high capital costs.

Additionally, the transportation distance for disposal increased from 12 miles to 83 miles one way. Initial quotes were double John Deere’s current cost, and this turned out to be the largest hurdle. After three months of negotiation, John Deere’s supply management group worked to negotiate a more favorable transportation cost by identifying two money-saving items. First, a trucking company was found that would meet John Deere’s height restriction with a modern trailer. Second, the cement manufacturer offered a better price for the sand based on the assurance the material coming from John Deere would be pre-screened to less than 0.75 in. diameter and therefore would require less processing at the kiln. The final price resulted in a 65 cents per ton savings.

A final challenge was logistics. The amount of waste sand generated depends on production rates at the foundry. With the quarry just 12 miles away, shipping spent sand from the foundry to the quarry multiple times a day was no problem. But the trek to the kiln in Mason City could be a four-hour round trip—not so easily done. The available area for waste sand storage at John Deere proved to be a chokepoint for production—sometimes filling up to capacity causing upstream production to stop until the material was shipped out of the dock. The foundry sand needed to be continuously offloaded, so shipping needed to be available at all hours and existing storage managed carefully.

John Deere used an existing but not used function of its transportation management system that automatically sends alerts to the drivers letting them know when the bins are ready to be offloaded.
“This aspect has incurred the most teething pain because we needed to re-learn a process that has worked seamlessly for over a decade,” Goettsch said.

As a representative of an energy-intensive industry, AFS Corporate Member Waupaca Foundry (Waupaca, Wisconsin) has pursued energy use reduction practices and projects to cut carbon emissions and maintain global competitiveness. For many years, efforts for reductions were project-based, but in 2015 the company began a 12-month effort to create and implement an energy management program for energy efficiency (ISO 50001).

“We had project-by-project successes, but that was as deep as it went,” said Bryant Esch, director of environmental engineering at Waupaca. “You can only go so far chasing good projects. Taking a management structure approach is a more methodical way. We are using metrics to track what is going on and that has really reshaped our direction.”

The program included identifying and implementing energy efficiency opportunities, gathering and analyzing data to gauge energy consumption and performance, undertaking energy-related training and communications measures, and conducting an internal audit to identify and fix shortcomings relative to the ISO standard.

The effort required full commitment from management and staff, but fortunately many systems required for ISO 50001 were already in gear at Waupaca Foundry.

“The big reveal was, if a foundry wants to go ISO 50001 for energy, it is actually very similar to other ISO programs,” Esch said. “You can use a lot of what you were already doing, and you are 60% there.”
Waupaca achieved third-party registration of the Energy Management System under an accredited ISO 50001 certification on October 20, 2016—the first such registration for a metalcaster in the U.S. and the second facility from any industry in the State of Wisconsin.

The energy management system has helped Waupaca Foundry reach an audacious goal. In 2010, the company pledged it would reduce its energy intensity by 25% in a 10-year time period.

“It started getting a lot harder because all the easy stuff was done already,” Esch said. “The last three to four years, only the hard stuff was left to go after. But we still have that objective and target goal. We are at 23% reduction and as we near the end of our fiscal year, we are really close to getting that last 2%. The management program has accelerated our success in squeezing the last juice of the orange.”

Based on the success of the program at the pilot facility in Waupaca, ISO 50001 registration is planned for a larger organizational roll out to its other plants throughout the U.S.

An energy audit at AFS Corporate Member McWane Ductile Iron Utah (Provo, Utah) identified an outdated compressed air system as the largest user of electricity in the plant, consuming 27%. In 2013, McWane upgraded the system through the implementation of two projects: first, replacing the outdated rotary screw compressors and second, replumbing the main compressed air line throughout the plant.

The old compressed air system was only monitored by air pressure. Compressors would be manually turned on when a drop in air pressure was noted due to an increase in demand. When the plant replaced the outdated rotary screw compressors, it chose new compressors linked to smart valves that monitor plant air usage and automatically adjust output to meet demand.

Secondly, the original compressor lines went in a loop, and isolating specific areas for repairs was difficult. When replumbing the lines, McWane installed them in a new layout that did not loop to isolate areas for troubleshooting.

After upgrading the compressed air system, McWane saw its energy consumption reduced by 2,500 megawatts per year (based on 2012 data). This equates to more than 2,600 tons of carbon dioxide per year.

Large initial capital and labor costs of the project were offset by a significant rebate from the regional electric company. Cost savings were more than $180,000 per year with a payback period of two years.
Along with the energy savings, compressor uptime improved, freeing maintenance personnel to complete other tasks. More consistent compressed air feed to pneumatic systems also reduced process variability. Additionally, the new compressed air lines are clearly marked and equipped with the latest safety devices.

Compressed air is used widely throughout the foundry business. Even with a high capital and labor cost, the cost savings and environmental benefit made it a reasonable investment.