For Bartel it all started with an opportunity to reduce iron casting scrap in the foundry. She initially aimed to determine whether core gas was a factor. Upon ruling out that issue, she further investigated iron flow velocities in the casting pattern gating. This led to discovering a necessary change to the gating system in order to manipulate the flow and intensity of pouring molten metal into the mold cavity. After making multiple adjustments and running numerous simulations within MAGMASOFT—maximizing its low-cost trial and error features—she arrived at a solution and was ready to test it in production. Process engineers, molding operators, and sample coordinators agreed with her recommendations, and pattern changes were made, which resulted in a successful sample run. The project netted a significant cost savings, helping to offset rising material costs and inflation. 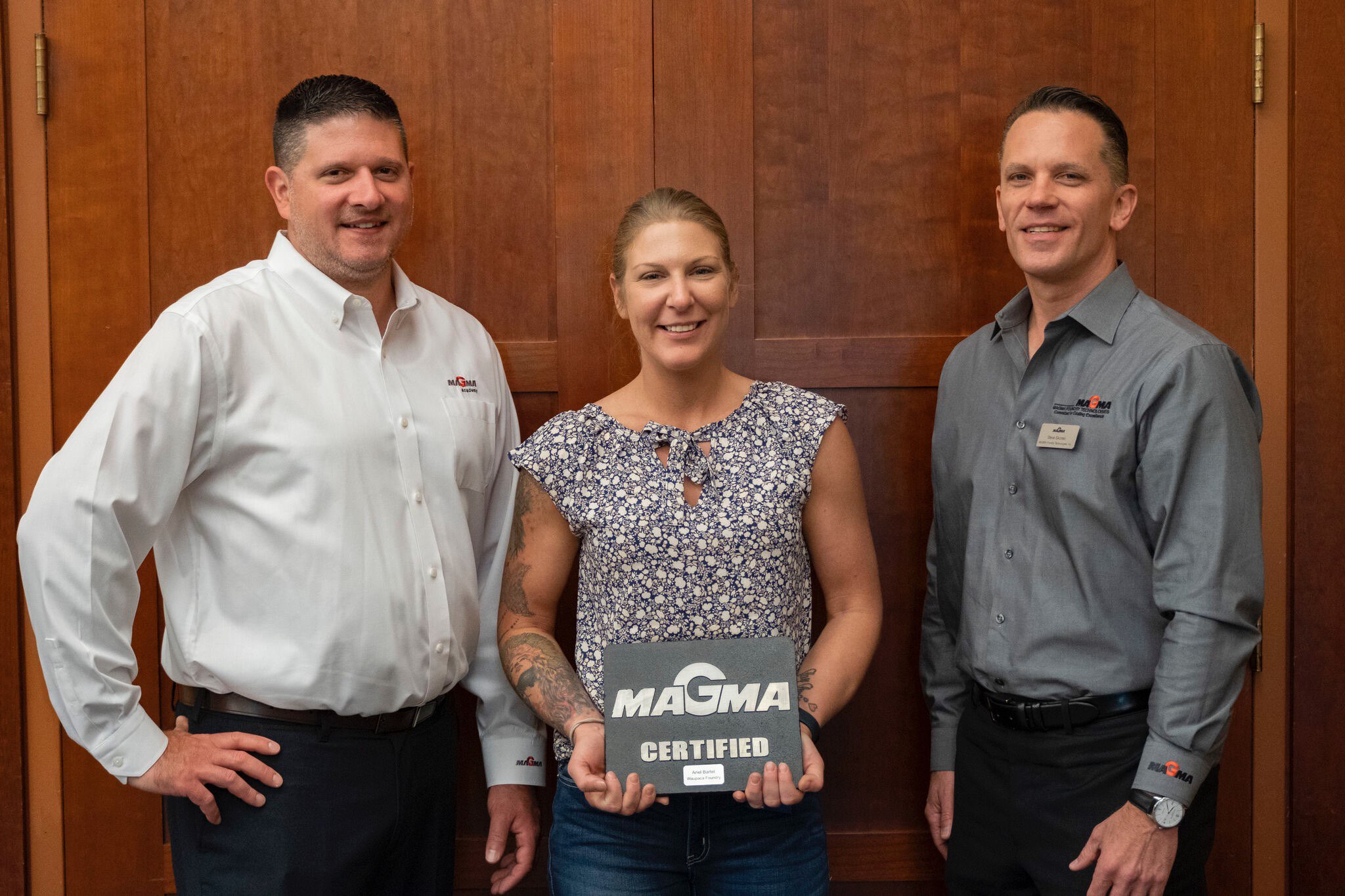 
Bartel presented her project findings at MAGMA’s North American User Group meeting in Chicago, thereby earning her Level III certification. The project was a welcomed challenge for Bartel, as it allowed her to grow her technical skills while leveraging the value of the simulation tool for a practical application. Director of Tooling & Process Manufacturing, David Scott, explains, “There are several software applications that do this same thing, but MAGMA is considered the premiere product, and Waupaca Foundry’s use of it (16 users across the company) becomes a competitive advantage.
Bartel’s history with Waupaca Foundry is rich with dedication and tradition. Though she now works at the iron casting supplier’s headquarters in Waupaca, the native Tennessean in her voice remains when she shares:  “My dad and three of my brothers and sisters worked at the Foundry, so for me it was just kind of how we lived. We worked at the Foundry. It’s in my family.” She started in the core room in 2013, and worked there just a couple of months before she moved into a quality role and then advanced to become a Quality Mill Room Auditor. Soon after, the Quality Administrator position opened, and Bartel was promoted into that role. Bartel then utilized the iron casting supplier’s tuition reimbursement program and completed her engineering degree. Upon taking drafting and 3D modeling classes, she knew that she wanted to work in tooling engineering. She graduated in 2019 from the University of Tennessee at Chattanooga, earning a Bachelor of Applied Science, Engineering Technology Management. In 2021 Bartel completed her Master of Business Management degree through the University of the Cumberlands. Both her bachelor’s and master’s degrees were completed while working full-time. 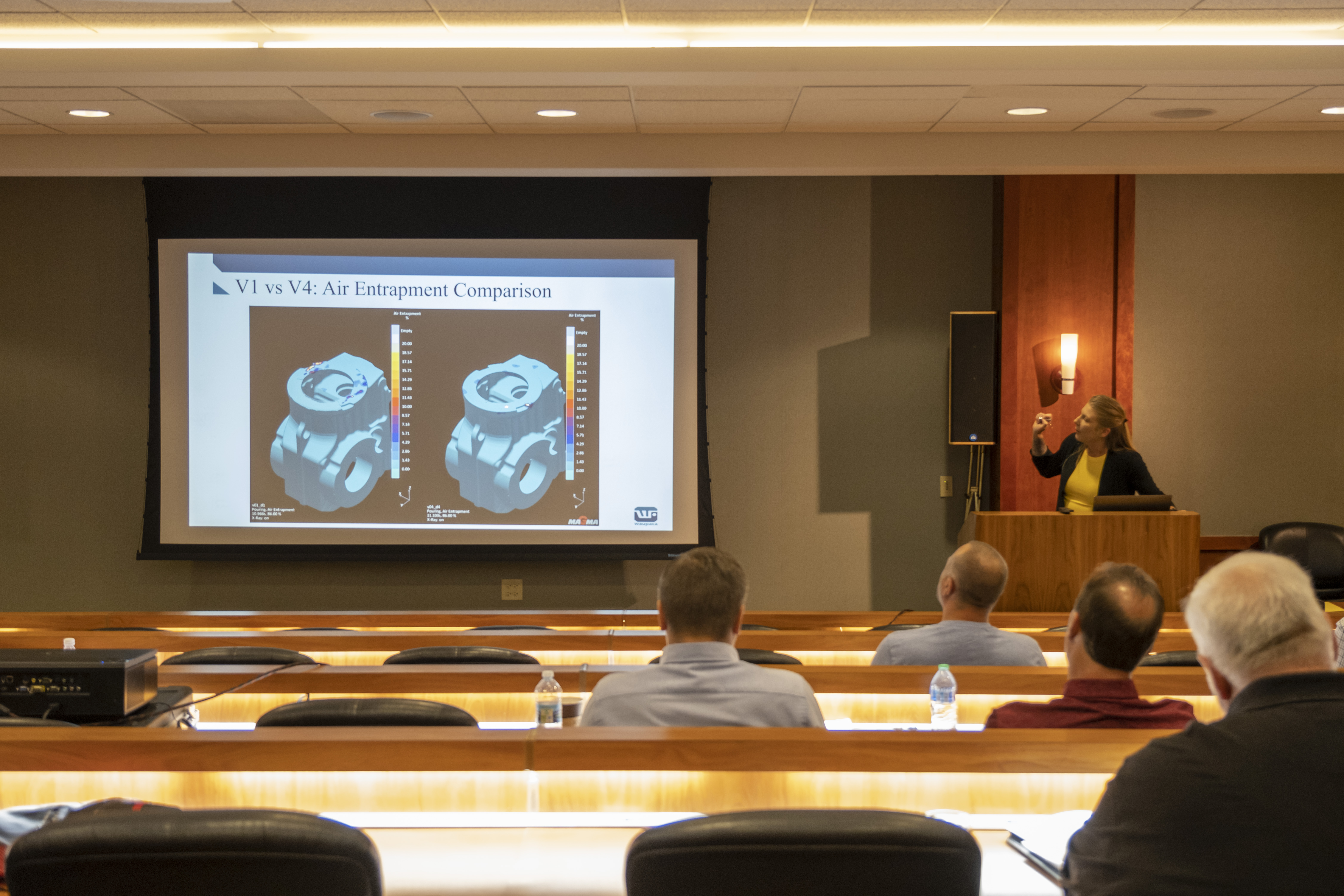 In late 2021 Bartel moved to Waupaca, Wisconsin, to work in tooling engineering at Waupaca Foundry headquarters. She is continually inspired by a good challenge, doing work that supports plant operations, and the variety of projects she gets to work on. “One day I may be re-gating a pattern, calculating gating for a new pattern, and the next day, I may be kicking off a project for building mill room fixtures or improving a tooling/layout procedure. I also work a lot with 3D printing,” says Tooling Engineer Ariel Bartel.

While Levels I and II of MAGMA teach users the basics of the software, Level III is a culmination of Levels I and II, and finishes with a capstone project that demonstrates, “If I were to do or change this, what might I accomplish?” Level III certification benefits the iron casting buyer by demonstrating design optimization and shows how even the smallest of changes can yield great gains, all in a simulated environment prior to production, using MAGMASOFT. For Bartel it brings the kind of challenge that invigorates and inspires her work.