Help Wanted, and Lots of It, on the Modern Factory Floor

U.S. manufacturing is a growth business; and so robust that one of the biggest challenges for employers is finding enough people to fill these good jobs. 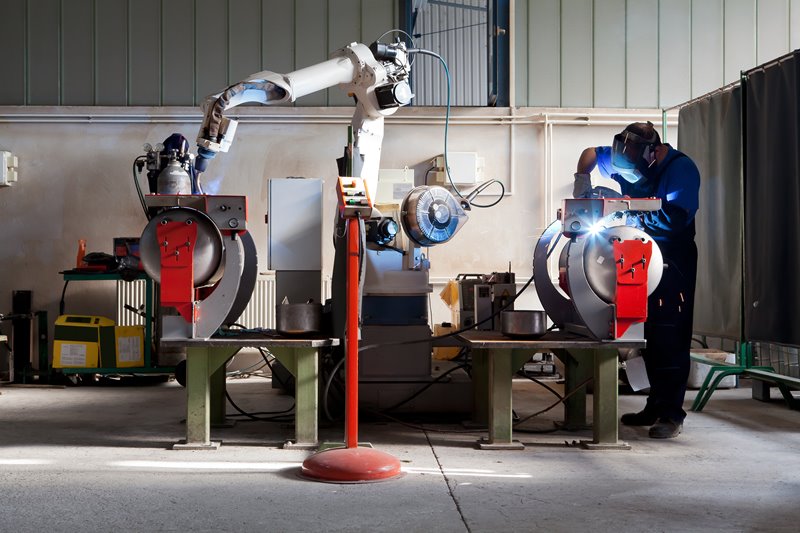 Help Wanted, and Lots of It, on the Modern Factory Floor

Robotics maker ABB has 24,000 employees in the U.S., and more job openings than people ready to fill them.

As the U.S. economy continues its long recovery from the Great Recession, one bright spot has been a sector that, to listen to the cynics, you might think had packed up and fled the country.  I’m talking about manufacturing.

The truth is, U.S. manufacturing is a growth business. Since the end of the recession in 2009, manufacturing employment in this country has risen by nearly 1.3 million workers, to a total of more than 12.7 million jobs. And a quarter-million of those manufacturing jobs were added in the last 12 months alone, according to the latest government employment report.

That’s why this week, in celebration of National Manufacturing Day, many of the 14,000 member companies of the National Association of Manufacturers are holding public events all over the country and even opening their factory doors to visitors, to help spread the news:  Manufacturing, powered by sophisticated digital technology, has made a comeback in the United States and is providing some of the country’s best, and best-paying, jobs.

In fact, U.S. manufacturing – everything from making precision parts and electric motors, to building automobiles, airliners and industrial robots – is so robust that one of the biggest challenges for employers is finding enough people to fill these good jobs. The latest government figures indicate there may be as many as a half-million unfilled manufacturing job openings in the United States right now.

Take Greenville, S.C., where my company, ABB, and a number of other global manufacturing giants have modern factories. That includes General Electric, BMW, Michelin and Bosch Rexroth. In Greenville, all these companies and others are engaged in a continuous, spirited competition to recruit, train and retain the employees we need to run our sophisticated, highly computerized factories.

It’s a challenge faced all over the country for companies like ABB, which though based in Switzerland employs 24,000 people at more than five dozen manufacturing or research-and-development sites around the United States. At virtually all of our U.S. locations, we have more job openings than people ready and able to fill them.

Why do so many of those jobs go unfilled – despite the fact that manufacturing pays more in hourly earnings on average than in any other industry in America?

We think part of the problem is a public misconception of what modern manufacturing involves. And so, part of Manufacturing Day’s mission is to help middle-school and high-school students – and their teachers and parents and even grandparents – understand how profoundly things have changed in U.S. factories from a generation or two ago. The old images of manufacturing work – dirty, dark and dangerous – no longer hold.

Today’s factories are clean, well-lit, air-conditioned and highly computerized workplaces. And because the sophisticated manufacturing that is done in these plants is not the sort of work that can be done by cheap, unskilled labor, it is not susceptible to the “offshoring” that devastated so many American manufacturing communities a generation ago.

That’s what our industry wants people to see firsthand with this week’s open-house events. But raising public awareness is only the beginning of the educational challenge.

More crucial is supporting the education and skills-training opportunities that can enable more people to enter the manufacturing professions as a firm pathway to the American middle class. And it means creating a work culture in which life-long learning and retraining are not only expected but encouraged – and enabled by supportive employers.

A recent study of 25 industrialized nations, “The Automation Readiness Index,” found that too few countries are adequately preparing the workers of tomorrow for careers in an economy where robotics-driven automation and artificial intelligence will augment human work. The good news from the report is that, contrary to the scare-mongering headlines, the robots are not taking our jobs. What the robots and other forms of automation are doing is changing the nature of human work.

Today’s automation means that the highly repetitive or physically arduous tasks that a generation ago went to cheap labor outside the United States can now be done by machines. What’s needed these days are the human skills of creativity, critical thinking and decision-making that only people – educated, trained people – possess.

We still need people, and lots of them, to design, program, operate and maintain the machines of modern manufacturing. We also need people who are capable of building the machines – as 600 ABB employees are doing at our robotics plant near Detroit in Auburn Hills, Mich.

The Automation Readiness Index study from the Economist Intelligence Unit and ABB earlier this year found that the countries doing the most to prepare their workforces – South Korea, Germany and Singapore – are combining government programs and corporate initiatives to update school curriculums, provide occupational training and support a system of continuous learning throughout workers’ careers. By such measures, the United States ranked only 9th in the Readiness Index.

But American manufacturers aren’t sitting around waiting for federal programs to solve the problem. Many of us are working with educators in our local communities to give people the skills they need for modern manufacturing and to encourage them to continue learning and advancing.

In Greenville, for instance, our company and others have developed joint programs with the local community college, Greeneville Tech, to provide training and certification. One of the most successful of these is a 150-hour course that qualifies Level 1 machinists to operate the CNC – Computerized Numeric Control – machines that do much of the precision work in today’s factories. ABB is eager to hire the best graduates from this program, and so are all our local competitors. And we also pay the tuition for our employees who want to pursue their two- and four-year degrees or beyond.

U.S. manufacturers are engaged in similar efforts in their communities all across the country, knowing that the workers of today and tomorrow are looking for jobs that involve leading-edge technologies, continual on-the-job advancement and meaningful careers.

Together, as companies and communities, we can embrace the new economic opportunities that modern manufacturing offer the people of the United States. That’s a message we’re eager to spread and proud to share – not only on Manufacturing Day, but every day.