The award recognizes those who go above and beyond to allow for flexible schedules, time off during deployment and show the utmost respect and support for their active duty military team member and team member's family.

The Patriot Award is supported by the Employer Support of the Guard and Reserve (ESGR), an office of the Department of Defense. The ESGR's mission is to encourage employment of members of the National Guard and Reserve who bring leadership to the civilian workforce.

Roloff was nominated by core room operator, Nathan Kaminske. Kaminske has worked for Waupaca Foundry since 2015 and has simultaneously served in the Wisconsin National Guard. He was deployed to Afghanistan in November 2018.

"Since I began working at Waupaca Foundry, Laura has been extremely supportive of my military service," Kaminske said. "I can think of no person more deserving to be recognized for her support of the Guard and Reserves."

For Roloff, the award came as a surprise because to her, granting Kaminske time off and being supportive was the natural thing to do. 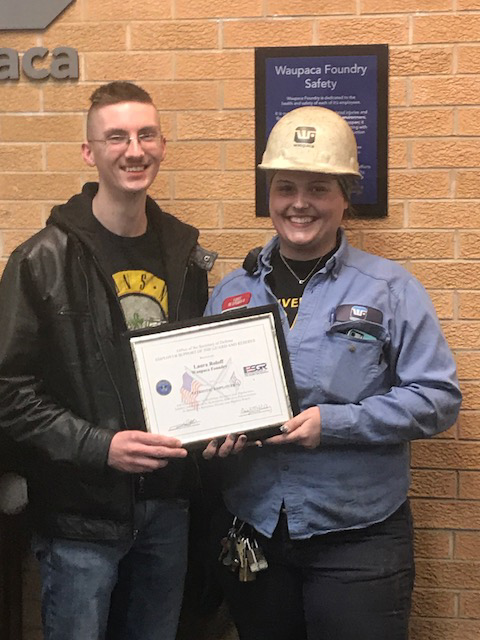 "We need to be supportive of our military because if he wasn't offered training then he wouldn't be ready to be deployed and protect our country. It just hits close to home because I am part of a military family," Roloff said. "My husband was a Marine and was deployed to Afghanistan [more than once]. I took [Nathan] to the side and had [my husband] talk to him. I just really wanted to make sure he was going to be okay."

"It goes to show that we are a company that supports the military, and we can accept applicants that can't guarantee they're always going to be here, but we make sure they have a job to come back to. Nate is still on my payroll; he's not going anywhere," Roloff said.

The Patriot Award is only presented to employers who not only hire Guard and Reserve members but also demonstrate superior support to military employees and their families. This award was previously nominated and awarded to team members in Waupaca and Marinette, Wisconsin.