During the summer of 2018, a large storm whipped through the Waupaca, Wisconsin community, causing a 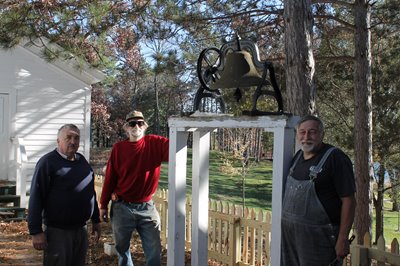 Waupaca Historical Society volunteers (left to right) Jeff Weasner, Lane Streck, and Mike Kirk assemble and install the liberty bell using the new casting frame.
couple of trees to fall, including some near the Hutchinson House and onto a historical bell residing there.

The Hutchinson House was built in 1854 and is a preserved home that resides in the Waupaca community, holding many treasures and artifacts from the Victorian era with many objects coming from Waupaca’s earliest settlers. One such artifact was an old school bell from Sunny View School, a one-room schoolhouse built in 1910 that operated as a place of learning until 1958. While the bell, dated to be from the late 1800’s remained intact, the storm had broken the over 100-year-old frame that held it upright.

The Waupaca Historical Society, not knowing what to do with the framework’s needed repairs, placed it into storage.

A few years later, Tracy Behrendt, the Waupaca Historical Society’s director, called upon one of the Society’s life members and special projects organizer, Lane Streck, to aid in fixing the bell’s framework.

Lane Streck, a hobbyist welder, began a plan of welding the pieces together. However, understanding the scope 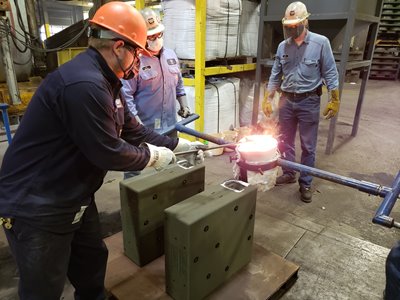 Waupaca Foundry employees (left to right) Jacob Fell, Jon Huebner, and Nick Meyer hand pour molten metal in to the mold. The pattern was donated by Hoosier Pattern.
of the project and wanting future generations that visited the Hutchinson House to be able to ring the bell, he recommended that the Historical Society utilize Waupaca Foundry’s capabilities to create a long-lasting piece.

The Waupaca Historical Society then reached out to Waupaca Foundry to reconstruct the broken iron castings. The Plant 2/3 location’s layout department utilized its 3D scanning technology to scan the broken castings and reassemble the parts in a virtual 3D setting. Next, the new casting was reverse-engineered from the 3D scans to physical casting models. Tooling engineers utilized the scans to create 3D models and then gating systems to pour and then feed the castings.

Waupaca Foundry then partnered with Hoosier Pattern to create a 3D sand printing of the mold for Waupaca Foundry to utilize in its melt department. Once the mold was sent to Waupaca Foundry, the melt team utilized a small hand ladle to fill the molds with molten gray iron, allowing to cool for 30 minutes. The millroom then broke off the gating system surrounding the casting and shot-blasted the parts to get them clean. By utilizing gray iron for the bell’s framework, it increased the durability, strength and the component’s longevity.

The new bell frame was then sent to Lane Streck where he painted the component black and reassembled it. This fall, the bell was placed again in the Hutchinson House’s backyard.

Since seeing the bell’s new frame Behrendt says, “It's just beautiful, and it looks perfect,” adding, “[Waupaca Foundry] used the same text on one of the sides that was on the old pieces, and then put the Foundry’s name on the back, which is wonderful that we'll be able to have a little bit of both histories — about the current history of that frame being built and mold being built, and then what it was before.”

When looking back on the project, it could have been easy enough to keep the bell in storage. However, the preservation of its history is an important part of what makes up the Waupaca community.


“History is so important, not only for us to just have an appreciation for those who came before us and to understand where the community came from but also so that we can learn and apply that to our future.” Behrendt says, “We have such a fascinating history. It’s so important to keep that going, and that's what [the Historical Society is] here for, and we feel like that we've been successful at it especially in the last five years or so, really trying to get the community involved in our history. This is just one of those ways, by having a project that another business or organization can help us preserve that history. Now, the foundry is part of [the bell’s] history. While they weren't connected with it in the past, they are now.”